Unwilling Flesh – Between the Living and the Dead (CD) 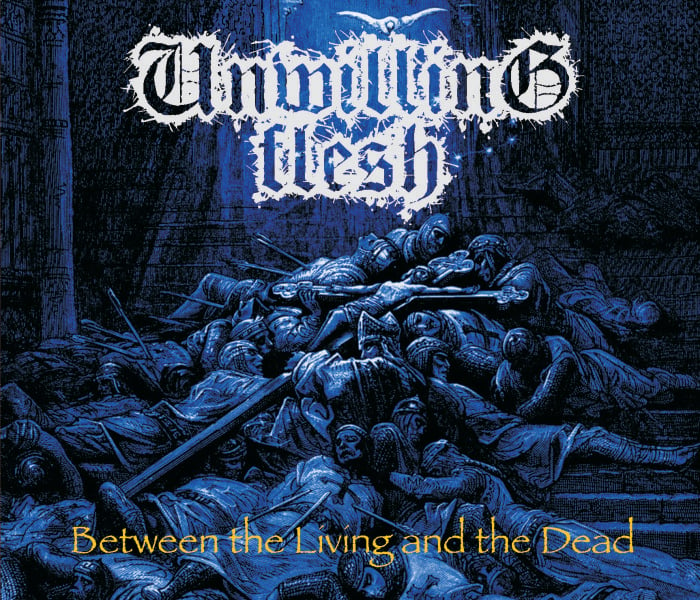 Carnage. Eucharist. Excretion. The sounds of these early ’90s Swedeath bands inspired multi-instrumentalist Andrew D’Cagna (Brimstone Coven, Obsequiae, Nechochwen, Infirmary) to mine his prodigious talents for the purpose of the "blatant, shameless" Swedish Death Metal devotion of Unwilling Flesh. Handling vocals and all instruments (with co-conspirator Aaron Carey, also of Nechochwen & Infimary, graciously providing skilled and memorable leadwork), D’Cagna has willfully allowed the rusted-chainsaw guitars and lacerated roars of an OSDM muse to guide his hand toward developing this heathen hallelujah meant to honor those once and always full of hell.

“But guitar tone and even riff mastery do not alone make for an album as fine and faithful as this one. D’Cagna has also written actual songs, with distinctive melodies of the kind that still make the songs on Slaughter of the Soul command such strong allegiance almost 20 years after its debut. They’re more ghoulish and morbid than they are pretty, that’s for sure, but they’re very effective at digging their hooks into your head and holding fast.” – No Clean Singing

“That patented Sunlight sound is out in full force here – the band buzzing and grinding their way through nine tracks of unadulterated old school worship that exhumes, re-animates and prostitutes the bile-soaked sounds of Eucharist, Desultory, Entombed and Unanimated to the fullest. They’re quite melodically inclined though, with numbers like “Fathoms Unfound” and “At One with the Earth” spliced with a batch of melodies that run the gamut from breezy (the former) to creepy (the latter).” – The Metal Observer

This CD comes in a 4-panel cardboard Eco-wallet.